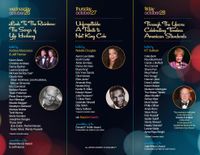 No words to describe my absolute excitement and thrill to be part of the 33rd Annual New York Cabaret Convention produced by The Mabel Mercer Foundation! It's a three-night cabaret extravaganza of the highest order - each night's a different theme with different performers. My night, October 27th, is a Tribute to Nat King Cole! It's a cavalcade of outstanding nightclub luminaries - don't miss it!

ABOUT THE MABEL MERCER FOUNDATION: Named after the great Mabel Mercer — arguably the supreme cabaret artist of the twentieth century —The Mabel Mercer Foundation serves to both perpetuate the memory and spirit of its legendary namesake and to promote public interest in classic popular song and the art of cabaret.

The work of The Mabel Mercer Foundation is constant and far-reaching. Among its many functions, it exists as a central source of information for artists, presenters, promoters, and the general public. Each year The Foundation receives thousands of telephone inquiries; the office files include material on more than two thousand performers. As such, the small and dedicated Foundation staff works on a daily basis to develop and solidify a community of cabaret artists, producers, and audience members.